Home›Itineraries›Taormina: Things to Do, What to See and Places to Visit

Taormina: Things to Do, What to See and Places to Visit

This guide has been created for those who want to know what to do and see in Taormina.

Taormina, in ancient times known as Tauromenion, is probably the most recognizable Sicilian tourist location in the world.

It is situated in the north-east coast of Sicily, between Messina and Catania. The old town of Taormina was built on a rock 200 metres high, while the valley is bathed by the wonderful Ionian Sea.

The prestige of Taormina, also known as the "Pearl of the Mediterranean", surely originates from the beauty of its historical monuments, from its natural landscape at the foot of Mount Etna Volcano, from the timeless atmosphere that you can feel among the old medieval alleys, from its enchanted bays on the coastal area and from its vibrant nightlife.

In order to discover Taormina at its best and to snatch its essence, we will show you its main attractions to discover and visit: 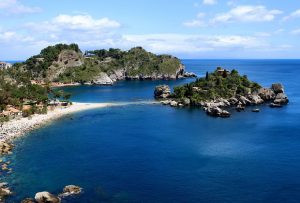 One of the symbols of Taormina is Isula Bedda (the beautiful island), which depending on the tides can become a small island or a peninsula, linked to the beach by a small and thin path made of sand and stones.

You can reach Isola Bella (photos) by sea or walking up and down the characteristic flight of steps that are accessible from the main road, which is connected to the old town by the cable car Taormina-Mazzarò. The access to its beach is free and in the warm months it is served by bars and lidos with beach chairs and umbrellas.
Because of the wild conformity of the ground, the barefeet tour of this shore with a unique charm is not recommended.

Submerged among little stacks, in crystalline sea which brightly reflects the blue of the sky, Isola Bella is a natural, artistic and protected monument, that is possible to visit for a fee.
Inside it, we can admire an ancient and suggestive residence, which houses refined works of botany and gardening expertly made, in the past, by a British noblewoman Lady Florence Trevelyan. 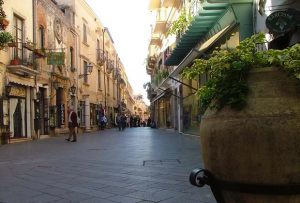 Corso Umberto I is the main street of Taormina's old town.

Its pedestrian path stretches from Porta Catania to Porta Messina, allowing you to take a suggestive and romantic walk among bars, restaurants and shops. The path snakes like characteristic alleys (including the particular Vicolo Stretto) in which it is necessary to get lost in to savour completely the old city's vibes.

Along the way, we can discover the main squares, churches, fountains and monuments, many shops and also the narrow street that leads to the Ancient Theatre. 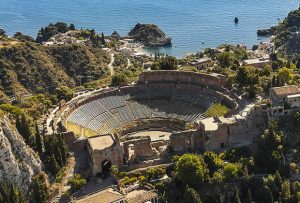 The most important attraction near Corso Umberto is the Ancient Theatre of Taormina. Its history is of Greek-Roman origin and offers a wonderful view of Schisò-Giardini Naxos bay surmounted by the mighty Etna Volcano.

Taormina's Ancient Theatre appears carved in the rock and was utilized in ancient times for dramatic and musical performances.

Nowadays we can visit it for a fee, as well as for concerts, festivals and other events.

Our Suggestions: B&Bs and Hotels in Taormina 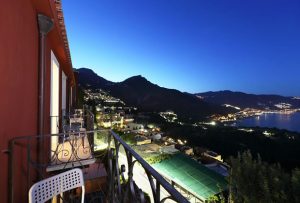 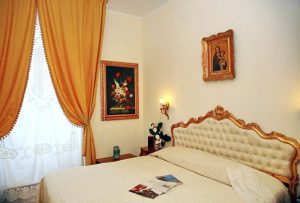 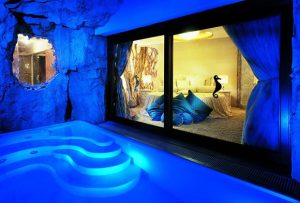 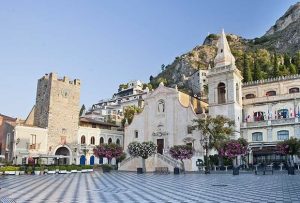 It has a breathtaking view and it seems litterally embraced by various historic buildings like Saint Joseph's Church, the former Saint Augustine Church (now Public Library) and Porta di Mezzo over which the Clock Tower is erected, and by bars and other meeting points.

The ample Piazza IX Aprile is the centre and the heartbeat of Taormina, in which we can often meet musicians and artists who paint portraits and landscapes, making visitors' experiences more typical.

The Duomo and Four the Fountains 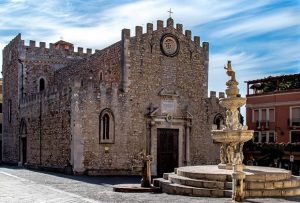 The Duomo and the Four Fountains in Taormina

Among the several churches of Taormina, the most important is Saint Nicholas Cathedral, situated along Corso Umberto near Porta Catania.

The first construction of the Duomo of Taormina dates back to the 13th century, it has the austere but elegant aspect of a fortress with the typical medieval battlements and shows a precious portal in the principal facade.

We also suggest a stop at Piazza Duomo (Duomo Square) to admire the monument of the Four Fountains made of Taormina stone in 1635. 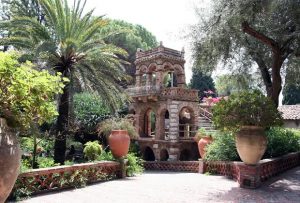 When you feel tired after having satisfied your walk in Taormina and you want to rest far from the crowds of tourists, an ideal solution is stopping at the Municipal Gardens.

The Municipal Gardens are the green lung of Taormina's historic centre, like an hidden treasure where the access is free and populated by a thriving and lush vegetation composed of rare plants in the typical English garden style and also enriched by particular buildings called "Victorian Follies".

The realization of the Municipal Gardens was strongly wanted and devised more than a century ago by Lady Florence Trevelyan, who is even today remembered as a philanthropist, an innovator and a benefactor of Taormina, thanks also to the work of Isola Bella's gardening mentioned above. 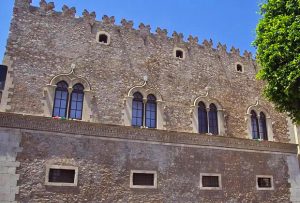 Among the various monuments bordering Corso Umberto in Taormina it is possible to notice the old Corvaja Palace or the Parliament Palace, of medieval origin and expression of the Sicilian Gothic style, that was modernized and renovated through the time.

At Corvaja Palace, whose name comes from the noble Corvaja family who lived there from 1538 to 1945, the Sicilian Parliament meetings took place in the 1400s.

Today it is considered one of the most important elements that characterize the history of Taormina, it houses the Sicilian Museum of Arts and Popular Traditions and also the Tourist Information Office. 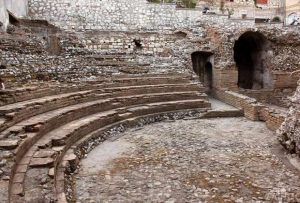 Taormina has another small Roman theatre, hidden in an inner street next to Corvaja Palace and behind St. Catherine Church.

The Odeon was accidentally discovered in 1892 after long archaelogical excavations during which some buildings erected on this millennial structure were removed.

You can visit it free of charge and go up through an impervious stairway, but the silence and the history that the place conveys make pleasant the effort.

Our Suggestions: The Best Guided Tours! 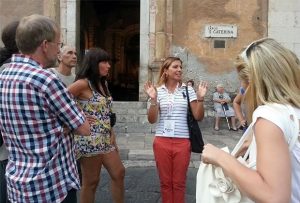 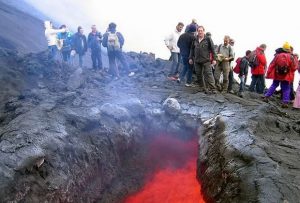 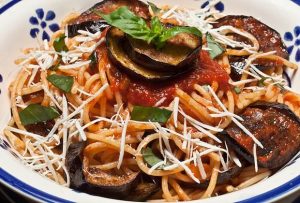 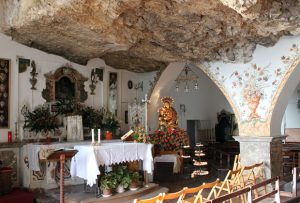 Leaving the old town and going towards the hills that are above Taormina, it is possible to discover the old Sanctuary of Our Lady of the Rock, so named because it is carved in the rock of a cave.

The small church dedicated to the Virgin Mary is particularly suggestive and thanks to its geographical position it gives a really breathtaking view.

We can reach the sanctuary following the street which runs behind the town, or on foot, walking in about 30 minutes up the stairway that starts at the residential area from Via Circonvallazione, and is composed of the so-called Way of the Cross' steps. 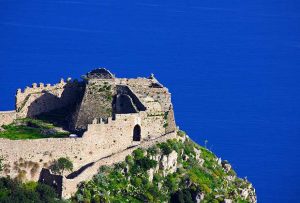 The Saracen Castle is located near the Madonna della Rocca Sanctuary, perched on Mount Tauro at almost 400 metres above sea level.

According to tradition, it was built by the Arabs that used the fortress as the last stronghold when they were attacked by the Normans in 1079.

Currently, the exterior walls are well preserved, unlike the interior ones which have almost collapsed, making the structure practically inaccessible to the public.

After having enjoyed the wonders of Taormina, it is recommended to visit also the nearby town of Castelmola and other interesting places such as Giardini Naxos and Alcantara Gorges. 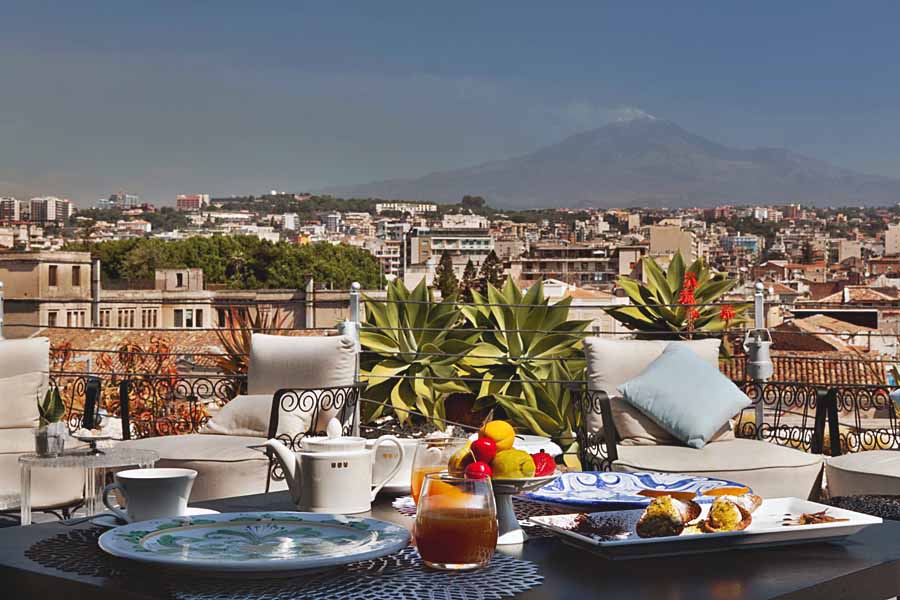 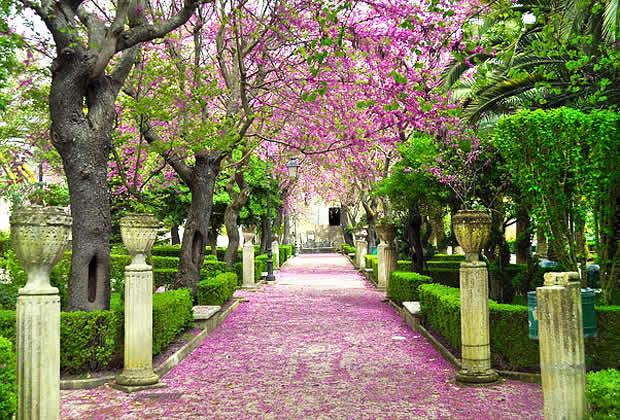